Best UK Cask Beer:
There can only really be one. It’s been around for a while but Siren’s Broken Dream is the best cask beer I drank this year and probably my favourite cask beer ever.  It’s a sublime stout that is at its very best on cask and for me it typifies why cask as dispense method is so important.

Best UK Keg Beer:
This was a tough call but I have to give this to Loral & Ardi, a three way collaboration between Cloudwater, Lost & Grounded and Verdant. This was a dry-hopped take on a Belgian tripel and I was amazed at how well it worked. It was super juicy with just a hint of the qualities you’d expect from a tripel, a real triumph.

Best UK canned beer:
I can only award this to Cloudwater for their Spring + Summer DDH Pale series. Both the Chinook & Citra and Southern Passion & Citra iterations were absolutely magical. I drank a few of these because they’re cheaper than their DIPAs whilst being just as delicious.

Honourable mention to Magic Rock for their Bearded Lady Barrel Aged Bourbon Dessert Edition which was bloody delicious (although not as good as the hazelnut version in my view).

Best UK bottled beer:
I only had this a few weeks ago but it was amazing so my best bottled beer from the UK this year goes to Brew By Numbers for their 05|25 India Pale Ale – Citra & HBC 431 – a supremely smashable juicy IPA. To have both BBNo and Kernel knocking out IPAs like this within metres of each other is amazing.

A very honourable mention must go to Beavertown for their Tempus Project Brosé, a bonkers barrel-aged sour that, thanks to a shed-load of grape skins, trod the line between beer and wine. This was excellent.

Best Overseas Draught Beer:
I can’t say that I drank a huge amount of draught beer overseas this year so this a fairly easy choice – it’s hard to beat some of the classic Belgian beers on draught and this is one of my favourites, so it’s Westmalle Dubbel that I enjoyed in Brussels at Easter. Lovely.

Best Overseas canned beer:
I went to Norway in the summer and drank a lot of very expensive beer. Some of it was good, some mediocre but Apocalyptic Thunder Juice from Amundsen Bryggeri was amazing. A juice-bomb packed with tons of passion fruit.

Best Overseas bottled beer:
I went to Ireland three times this year and drank a lot of beer there too. I wasn’t expecting a lot from Hope’s Summer Session IPA but it was delightful. Plenty of bang for your buck that belied it’s ‘session’ moniker. I was not surprised to read that it was brewed with citra.

Best Collaboration Beer:
I can’t look beyond Loral & Ardi for this one.

Honourable mention to Beavertown and Trillium for Beaverillium which was great.

Best Overall Beer:
Again I can’t look past Loral & Ardi, the three way collaboration between Cloudwater, Lost & Grounded and Verdant. Arguably three of the most exciting breweries in the country produced one beer that really wowed me.

Best Branding:
Beavertown and Cloudwater continue to excel on this front. The labels for Northern Monk’s Patrons Project are wonderful and Burnt Mill’s cans are stunning. I can’t pick one, I don’t think I really care quite enough.

Best UK Brewery:
I probably have to go with Cloudwater on this one, narrowly fending off Beavertown. Yes – there is a lot of hype surrounding CW, but much of it is merited.

Best Overseas Brewery:
I don’t drink a huge amount of foreign beer unless I’m away from home as there is so much good beer in the UK now. As such it’s hard to think of a brewery that stands out as I’ve simply not had multiple beers from many overseas breweries. As above I drank a lot of Irish beer this year, so I’ll give this one to White Hag – everything I’ve had from them this year has been pretty solid.

Best New Brewery Opening:
I can’t think of many contenders for this either, so I’ll go with UnBarred from Sussex. I attended a Meet the Brewer event with them this year and everything I’ve had from them has been good if not as refined as I’d have hoped. I think they’ll be one to watch in 2018.

UK Pub/Bar of the Year:
I keep finding myself back at Cask Pub & Kitchen despite not working anywhere near there anymore. Always a great beer range, cask and keg, good food. Can’t knock it.

Honourable mention to The Harp just off Trafalgar Square which remains one of my favourite places in the world.

Best New UK Pub/Bar of the Year:
Only one new place comes to mind and I don’t think it’s good enough to be included in the list based on my visits there so far.

Best Overseas Bar of the Year:
I enjoyed visiting Mikkeller Viktoriagade when in Copenhagen earlier in the year, it was the one overseas bar that really made me think  “I wish I lived around the corner from this place”.

Best Brewery Tap of the Year:
I haven’t really been to many this year, the addition of a seating area at Brew By Numbers is great and Fourpure has improved its offering dramatically with the menu screens and live Untappd info.

Best Beer Festival of the Year:
Didn’t attend any in 2017.

Supermarket of the Year:
It’s been great to see most supermarkets upping their games this year. Marks & Spencer is far and away the best though and some branches (i.e. Moorgate) are superb.

Independent Retailer of the Year:
Purely based on convenience I have to give this to Clapton Craft really. Usually a great selection, prices are okay and it’s near to my work.

Other contenders are Ghost Whale, which for me has the most interesting beer selection in the capital and Hop, Burns & Black in Peckham.


Honourable mention to the blog of Retired Martin which I discovered this year – I’ve enjoyed his documentation of the backwaters of the UK (and beyond) and he is always good for a pub recommendation pretty much anywhere.
No comments: 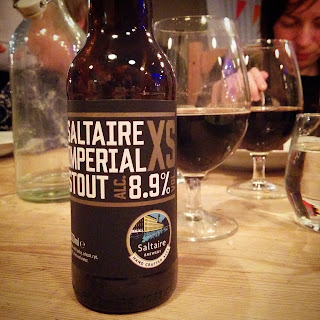 My final beer enjoyed at the Wanstead Tap whilst I was there for the E7 Supper Club. My girlfriend and I sensibly decided to split this imperial stout (which was served with an excellent chocolate brownie). It was rather light in body which belied its 8.9% ABV - it had some nice chocolate notes and more than a hint of molasses but it was nowhere near as rich as I had expected/hoped. Fine but not amazing. 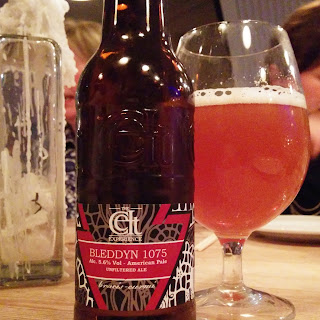 Another brew I had at the Wanstead Tap during the E7 Supper Club I went to, this time an IPA from the excellent Welsh brewery the Celt Experience. This is brewed with a variety of new world hops that lend it a sticky, resinous character and a fruity yet rather dry and bitter finish. I enjoyed this one. 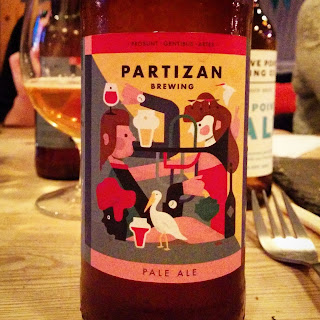 The second beer of four at the E7 Supper Club I attended was this pale ale from Partizan. Brewed with Sorachi Ace - a Japanese hop commonly used in wheat beers and saisons this was a very interesting beer and a definite break from the pale ale norm. The hops lent the beer a lemon flavour alongside some pineapply and some lovely grassy/wheaty notes. I really enjoyed this one and having been a touch disappointed with the last couple of Partizan beers I'd had, I was glad I liked it as much as I did. 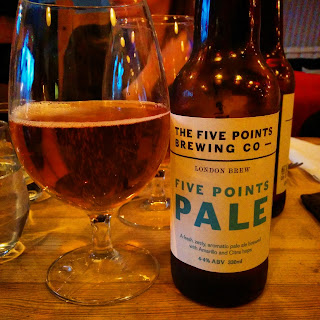 For my birthday recently I was lucky enough to be taken to an E7 Supper Club by Michael Sanders at the Wanstead Tap in East London. Diners are treated to four courses of delicious food with an optional beer pairing also available. I won't go into huge detail about the food (or indeed any, suffice to say it really was amazing) but I did have the four beers to go with each course. The first was Five Points Pale from the east London brewery. This is yet another fairly prominent London craft brewery that I had, up until then, somehow managed to avoid. This APA is brewed with Amarillo, Centennial and Citra hops which give it a zingy fruity flavour. The US hops have been showcased excellently in this beer which was fresh and highly drinkable with lovely orange and lemon flavours. 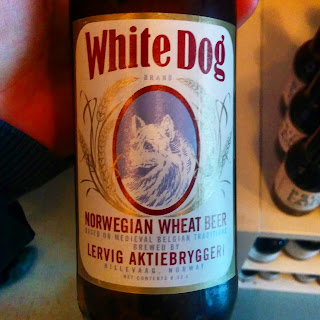 Lervig have been pushing their beers pretty hard in the UK of late and I'm a pretty bag fan of theirs, having discovered a good proportion of their range at a Draft House Sunday Session last year. I recently attended a dinner club event at the Wanstead Tap in East London and while waiting for things to kick off I shared a couple of bottles of this wheat beer with my girlfriend. This is a very solid if unspectacular witbier – a nice wheaty banana flavour with a decent hint of clove in there too. It’s not a world-beater but it is very easy drinking. 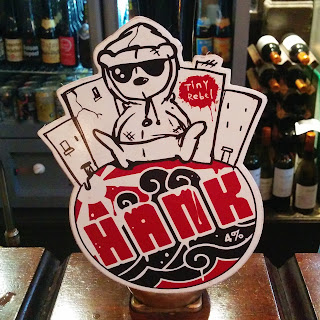 One of my favourite things about the Craft Beer Co chain in London is that the invariably have something from Tiny Rebel on and it is invariably pretty good. I recently spent a very pleasurable Saturday evening drinking pint after pint of Hank, a session-able golden ale at the Farringdon branch and very good it was too. Rather light in body but what it lacks there it makes up for in flavour - it has a big tropical fruit flavour to it that belies its 4% ABV. A slightly bitter and dry finish but that doesn't detract from its drinkability. Very tasty.
Brewery: Tiny Rebel Brew Co.
Country: United Kingdom
ABV: 4.0%